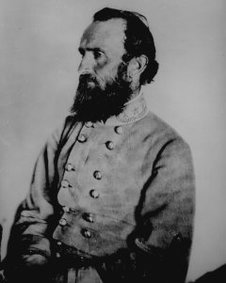 Lieutenant General T. J. “Stonewall” Jackson (National Archives)
Thomas Jonathan “Stonewall” Jackson was born January 21, 1824 in Clarksburg, Virginia.  He graduated from West Point in 1846 and began his official military career with the US Army as a brevet second lieutenant in the Mexican-American War from 1846-1848, where he first met Robert E. Lee.  After many successful shows of leadership in the war, he was promoted to rank of major.

In 1851, Jackson resigned his military commission and accepted a teaching position at Virginia Military Institute in Lexington, Virginia. His style as a professor was controversial, but nonetheless invaluable, as VMI continues to use many of his philosophies today.

At the war’s outbreak, Jackson accepted orders as a Colonel of Virginia militia and commanded at Harper’s Ferry.  Jackson then took on the title of Brigadier general and led troops in the epic battle of First Manassas, where he and his brigade earned him the title “Stonewall.” So began Jackson’s status as a military celebrity.  In November of 1861 he was promoted to major general and dispatched to the Shenandoah Valley to defend the south from Federal troops headed towards Richmond.

Jackson organized extremely successful military maneuvers at Front Royal, Winchester, Cross Keys, and Port Republic in the spring of 1862.  These led up to the Seven Days Battle around Richmond, where Jackson’s nonplussed performance on the outset gradually gained momentum.  He made more epic showings at Second Manassas and then again in Sharpsburg at the Battle of Antietam.  Following these events the Army of Northern Virginia was reorganized and Jackson was designated lieutenant general.

In December of 1862, Jackson commanded a victory at Fredericksburg, and then the famous flank march at Chancellorsville in May.  The same night as that victory, May 2, 1863, Jackson was wounded by friendly fire while making a reconnaissance with a member of his staff. He died eight days later on May 10 from pneumonia, a complication of having his left arm amputated from the incident.  Thomas “Stonewall” Jackson was with his wife and only surviving daughter when he died, and is buried in Lexington, Virginia.